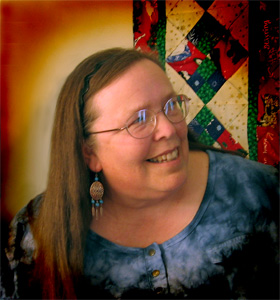 I’ve always been a storyteller, even when I was young. I loved to hear about strange worlds and new fantasies. When Star Trek was released, I remember my excitement at this new adventure. New worlds where anything was possible! It was like a flash of light that struck my imagination, giving me permission to create my own places and my own characters.
But life has a funny way of sending us on detours when we think we’re making a straight shot. I went to the university as a music major, learning about a different side of the creative arts. It allowed me to travel to Europe and Japan in the process, and I had a chance to meet with and learn about different cultures. I think this was a very important time for me, even though inside I was feeling lost and lonely. It widened my horizons and helped me see that people are different, but the same, around the world.
Having a family cured me of my loneliness, but I also learned about loss and devastation during this period of my life. Experiencing bad feelings, as well as good, has helped me as a writer. It helped me create well rounded characters with both bad and good in them.
I’m excited about creating new characters and situations. My passion for storytelling hasn’t lessened over time; I believe it accelerated to a new level. We are only here in this life for a finite amount of time and I’d like to leave a bit of me behind when I depart.
My secret passion is people watching. Since I was in grade school I can remember standing back and observing different people in different situations. I would sit on the playground and watch the interactions. As I grew up I realized the players didn’t change much, except they were older in physical age. Some people were different, but most stayed the same.
The main thing I would like people to know is that I have fun when I write. I can stay in these special worlds for hours without realizing how much time has passed. I plan to continue to write for as long as I am able and hope that others will enjoy being there with me.