I've been talking with Loretta Stephenson (Art By Retta) the last few days, nailing down the schedule for the book covers and illustrations on our upcoming projects. Then it suddenly hit me. We've set the goals to do these books. And now, they will happen!

Without goals, ideas, projects and whatever else you might be trying to do will probably never materialize. Until you sit down and commit yourself to your projects they will be something you talk about but never see. My way of setting goals is to get out the calendar and look practically at what I'm doing and how much I can get done. Then, I add in time for mishaps, setbacks and the usual daily occurances that can happen. I make a chart of what I need to get done and in what order. Then, I set my schedule.

Setting my schedule is important to me. Without it, I would be flopping back and forth from project to project not finishing anything. It is true, however, there are times when I get an idea and I need to write it down. So, I stop what I'm doing and take the time to write it out. That way, I don't have to wonder later, what it was I was thinking about. But, for the most part, I like to stick to my schedule.

Make a list, map it out, commit to it and set your goals. You can finish that story and the next one too!

"Shoot for the moon! Even if you miss you'll land among the stars." ~~  Les Brown (no relation)

"Follow you heart. If you are willing to work hard, you can visualize your goals." ~~ Michael Flatley
Penned by Karen Elizabeth Brown at 3:01 PM 3 comments:

Do your characters make a transition throughout your story or do they stay static or the same? A really good way to follow your character's inner journey is to start at the beginning. Well, duh, you say, that's obvious! But I'm going to give you seven pointers that will help you follow that inner journey.

So you can see, a emotional journey was made by your character, an inner journey, that was followed by outside events. You can make this happen for your character in scenes, chapters or for a whole story. In any case, your character will have depth and the reader will be able to follow your character's journey. 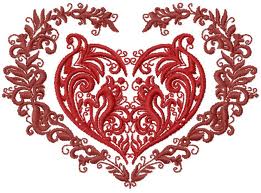 Until Chaucer wrote poetry about "Valentines" in the 14th century, this holiday was for the martyred Christian saint(s) Valentinus. It was first established by Pope Gelasius in 496AD and later deleted from the general Roman calendar of saints in 1969 by Pope Paul VI.

It is celebrated in countries around the world, but mostly in the West.

As noted above, the day first became associated with romatic love in the circle of Geoffrey Chaucer in the High Middle Ages, when the tradition of courtly love flourished. By the 15th century it had evolved into an occaision in which lovers expressed their love for each other by presenting flowers, offering confectionary and sending hand-written greeting cards (known as "valentines").

Modern Valentines Day symbols include the heart shape outline, doves and the figure of the winged Cupid. Since the 19th century, hand-written valentines have given way to mass-produced greeting cards.

I read a book recently that told me that each scene in your story should be conflict ending in a crisis that leads the protagonist farther away from their ending goal. If you ask me, I think that much conflict pounding you over the head, for an entire book, would leave you exhausted by the time you finished, or if you finished. How about a little spacing in there with some breathers, so the reader can reflect on what just happened.

If you decide to kill someone off, especially someone the readers might be attached to, add a little balance by putting in a scene to remember the dead character with, maybe a flashback. Or, if you're not into flashbacks, a scene discussing him with other characters. Whatever you do, make sure you give your readers time to process a major event, then go and blow up the world.

A word about crisis: A crisis is that crucial moment when circumstances or people change, usually without warning. Each crisis becomes a turning point in the story where attitudes and the readers' perceptions will change. Each crisis should create as many questions as it answers, so the reader continues to be uncertain about where things will end. A crisis will continue to develop the story and be effective, providing we space them out. Again, we need balance.

Try writing a scene that ends in a crisis and see where it leads you. Does it demand that you follow it with another scene and crisis? If so, is it because it's a build up to a major event? Remember, even after your major event your readers will need to clear their heads. Turning the page to find a new crisis might just pound them over the head. But, depending on your subject, maybe your readers want continual explosions. Maybe they are adrenalin junkies! If not, think about adding those breathing points. If you don't like it, there's always the delete button.

"Let him who would move the world first move himself." ~~~ Socrates
Penned by Karen Elizabeth Brown at 4:12 PM 5 comments:

Today I want to touch on the familiar topic of  "showing vs. telling". I say familiar because so often in critiques this is the first topic to be addressed for new writers. Are you showing the action or just telling us about it and what's the difference? I could write a whole article on this, but instread, I'm going to give you a brief overview of how you can examine your work and see the difference.

When you are "telling", the writing is plain and straightforward, yet it often has difficulty involving the reader. An example of telling would be: Kathy was sad. This sentence tells what judgement needs to be made about Kathy, yet doesn't provide evidence to support that judgement. For example, how do we know that Kathy is sad? How is she behaving? What does she look like? Writing which "shows" generally incorporates vivid descriptive detail in order to help that reader evaluate the evidence to make the appropriate judgement. For example: Kathy cried all morning, while wringing her hands together. She sat still on the couch, unable to talk to me.

The following four items are things to avoid when you want to show and not tell:

1. Avoid -ly adverbs after said. ie: "He said happily." That's telling but not showing how he was happy.

3. Avoid starting with As or -ing.

Remember, there are exceptions to every rule. My personal opinion is, a little of something flavors the recipie but a lot makes it unedible. The goal is to achieve good writing that shows your reader a picture of the action and moves the plot forward.


Todays Quote: "A writer should write with his eyes and a painter paint with his ears." --- Gertrude Stein
Penned by Karen Elizabeth Brown at 8:30 AM 6 comments: