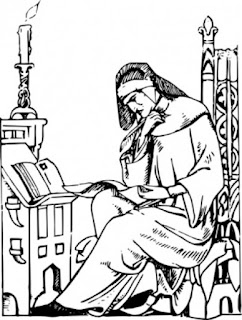 There are many ways an artist tunes up his/her mind in order to keep it brimming with ideas. Some people meditate, while others enjoy the stimulating company of other people. Whatever your choice is, it's important to feed your creativity on a regular basis.

Here are some ways to stimulate your mind (in no particular order):

1. Puzzles and games: these offer challenges to the mind as you work out the solutions to the problems.

3. Books: reading brings new ideas for the artist's own work.

4. Music: relaxes the soul and also revs up the creative mind.

5. A walk or drive in new surroundings: seeing new places stimulates our curiosity.

6. Artwork: relaxes the body and mind.

Whatever you choose to do (and there are more not on this list) you can be sure that you'll find yourself refreshed and ready to begin new creations. What do you like to do to stimulate your creative mind?

Penned by Karen Elizabeth Brown at 1:08 PM No comments:

Galaxy Nomads: Free For You!

Now! Just until August 30th you can get a copy of Galaxy Nomads: Chronicles of the MacKenzie Clan FREE!

Use this coupon FP94H and go to Smashwords HERE. I hope you enjoy reading this exciting book.

The MacKenzie clan is forced to flee from the devastating destruction of a supernova and is challenged to a ruthless game of survival. When all seems hopeless, a new generation arises to battle their worst enemy in a unique battle of wits. Will the MacKenzies survive betrayal, pirates and wormholes to the outer quadrants? Here they find a new race of people on the Patchouli planet where the female is Alpha. They learn wisdom from the mystics and seers on their jaunt through the universe and from across the galaxy two brothers are reconciled to each other. They experience love and hate in the Merridian sector when a prince is abducted and must be rescued before a cruel cousin steals the throne. An epic read that will send you spiraling at warp speed through all the MacKenzie generations.

"Anyone who tells you it's impossible is wrong and you should probably stop taking their advice."  ~~James Patterson ~~
Penned by Karen Elizabeth Brown at 12:48 PM 4 comments:

The Beginning of "Blue Moon"

In the middle of working on a sequel to my latest novel I found myself sketching out the beginning of a short story. I have so much fun creating new stories. Now I want to share the beginning of Blue Moon with you.

One final scorching war on Earth caused the Terrans to scatter across the universe. The planet suffered from a war of paralyzing toxins that sent the survivors scrambling for clean air. They searched for soil unfettered from the poisons that covered the ground, making Earth an impotent ball of rock. It had become a dust bowl unable to produce any kind of growth. Through the search for better land, the clans sprang up. They were groups of people bound together for survival. Connor was a rare specimen, who still had muscle mass even on the food supplements his clan could provide. Because of this, he became a protector. A warrior in his clan, trained to fight and win.
Although food was scarce on Earth, technology continued to increase. Interplanetary travel had been developed for large groups and many clans left Earth for more fertile worlds. Connor’s clan was small, with only fifty-four ships in its fleet, so they didn’t have enough firepower to win a skirmish over a place to stay. They became galactic gypsies; trading their services and goods for a brief respite on a planet. That is, until they found what was called the Blue Moon orbiting the large planet Arcturus. The Blue Moon was a century’s old, uninhabited planet that was rejected by other civilizations because of its proximity to the well of evil that occupied Arcturus. That evil called itself the Hunters.
The Hunters possessed technology that was arcane to most worlds and they used it to create a weapon so terrible that it was outlawed on most other planets. This was the latchpin. A device that, on its highest setting, would melt its way through a Terran, leaving only fizzling goo behind. The Hunters were proud of their skills at domination and supremacy. They would make war on all who would appear in their quadrant. Those that survived became their slaves.
Connor’s clan hadn’t met up with their society before, but they were desperate for a place to rest and recuperate. Regardless of the latchpin stories, they decided to negotiate a treaty with the Hunters. After all, they couldn’t let a perfectly good planet go to waste.

I hope you enjoyed this prologue to Blue Moon. The entire story will be available near the end of the year. I'll keep you posted.
Penned by Karen Elizabeth Brown at 10:06 AM 2 comments: