I'm anxiously awaiting my book cover for Call of the Dragon. My artist said it would be the end of the month, so I've been preparing my manuscript for release on Amazon and Smashwords in early November. The last minute details are being taken care of and soon I'll have Part 1 of the Dragon Stone Trilogy ready to go.

A lone bell tolled in the eastern tower, announcing the death of the King. Elias Gargarin, stunned by the King’s sudden demise, lit a candle and mourned the loss of such a great ruler. A loyal servant to the sovereign house of Tavish, he watched with increasing alarm as Crown-Prince Rali prepared to take the throne. Squabbling and division ensued among the mages who served the crown. The old ways were denounced and forbidden. One by one, the mages who continued to perpetuate the old ways were executed as a new evil threatened the Kingdom of Mar. The King’s High Mage, Master Sebastian, was preparing to usurp the throne!
A single raven sped through the sky, dispatched to the Northern Mountains by one lone mage. Its quest: to seek out the council of dragons, in the fervent hope that it wasn’t too late. But the council had been decimated by another perpetrator. Only a single dragon was left to answer the call. He chose young Elias to be his rider; a poor commoner! But there were secrets to be revealed and a quest that only Elias could accomplish. Was he ready?


Prepare to get your ebook at Amazon and Smashwords in November!

As the holiday season approaches, I'm finding that my daughter and I are beginning our preparations for a trek to Florida and Walt Disney World. Since I will be traveling in a wheelchair, I've discovered very little information about a traveler's experience with WDW and disabilities. Granted, there are the standard amenities available, but I've had to dig to find out how to get there with my oxygen and my wheelchair.

Example 1: Travelers with oxygen must be at the airport three hours ahead of time so airport security, TSA, can examine my oxygen concentrator to make sure it's not a bomb.

Example 2: A traveler with oxygen is required to carry enough batteries so they will have 1 1/2 the amount of oxygen for their required trip.

Example 3: At the moment WDW is undergoing a change for its disabled guests. They are throwing away the Guest Assistance Cards and implementing a new system called Disability Assistance Card (or something with those letters!). The new card requires the guest to get a new card each day so they can show it to any cast member at the ride they choose to go on. A time is written on the card and the guest can return at that time to ride the attraction. But they have to wait again when they get back to the ride! Okay Disney, it's time to work out the bugs!

I plan on gathering all the things I learn about traveling to the magical land of Disney by wheelchair and I will put them in a booklet for other travelers. For all my other readers, be patient. This is an important booklet for those traveling with a disability. 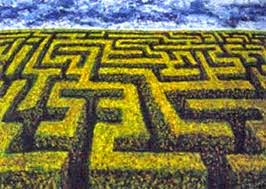 For all of you writers who have already set up your author page and have this app, please bear with me. I'm just getting around to navigating the maze at Facebook and discovering that the author page is separate from your homepage. After that, you'll find this app can make things easier for your readers.

This app is a square red box on your author page and can be accessed by your readers with a simple click of the button. It pulls up your books, your profile and any signing events you have listed. Also, under your picture it will say "Official Website." That link brings your readers to your designated website. Remember, you have to have an author page set up first to get the app. No page, no app.

Here's what my page looks like so far (it's a work in progress!):

Next, scroll down and click the box that says "Read My Book."

So much of author visibility is dependent upon getting your readers to see your books and their links. This app is one more way to help your readers find their way to your books. I hope this was helpful. Enjoy your writing! 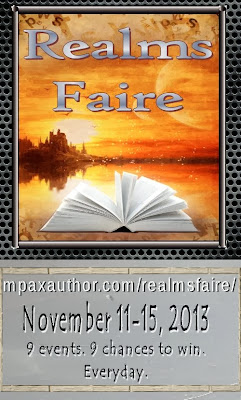 November 11-15th will be the realms faire and jousting tournament for writers at:

Prepare to be amazed at the excerpts offered by each "knight" as they joust for the honor of being the winner.

Have you ever heard anything so crazy? Jousting for writers? But seeing as how I'm working on a book series based in fantasy and in the first book there is a jousting tournament, I love it! I'll be using an except from my upcoming book Call of the Dragon, book 1 of the Dragon Stone Trilogy in the joust.

Yes, I will be jousting and I hope you come and vote for me. Don't forget to use my words in your post. It will give me extra points.

Comments open at 3 pm to 9 pm eastern standard time. I'll be reminding you about this again as the time approaches, so put it on your calender and I hope to see you there!
Penned by Karen Elizabeth Brown at 3:50 PM 6 comments:

While I'm waiting for my book cover to come back from my artist, I ran across some scribblings in one of my notebooks. It was about the role contradictions in plot development. I thought I'd share them with you.

Definition: A contradiction is something about a person that piques our interest because it betrays what we expect, given what else we know about a character. It expresses a paradox of human nature: people do one thing and exactly the opposite. They're this, but they're also that.

2. Provide a straightforward method for depicting complexity and depth.

Specifically, they provide a means to portray:
But there are limits to what is credible. Contradictions that seem implausible may enhance a comic portrayal, but they can undermine a dramatic one if handled carelessly. Ask whether the contradiction draws you, the writer, toward the character, or permits you an emotional distance. If the latter, you're looking at the character rather than emotionally engaging with her. If you can justify the contradiction, root it in backstory and unearth scenes from your imagination that reveal how this character develops these seemingly irreconcilable inclinations, it will become less conceptual and more intuitive and organic.


"The great challenge of fiction is creating characters who feel logically, emotionally and psychologically consistent - who make sense - but retain the enigmatic power to surprise." ~ Brian Klems ~
Penned by Karen Elizabeth Brown at 1:35 PM 2 comments:

Social Media and You - Are you reaching your readers?

I've been tearing my hair out trying to keep up with my social media contacts and in doing so, I've found myself on that round wheel running in a circle. Just how important are social media contacts in this age of Twitter, Goodreads and Facebook? Now I'm hearing about Linkedin (which I've just joined) and LiveJournal (I believe it's called). And I'm sure there are many more out there that I've missed.

My question is: How much of this contact is actually going to reach my potential readers? I see many advertisements on Twitter about a person's book, but are they reaching the right people? How do we reach the right audience online? I imagine finding a reading group that's not made up of all authors (no offense intended), not just so I call sell my book, but so I can make some contacts in the real world of readers.

Readers have insights into books that authors don't always see. I was reading a review of a book by a reader that held a different perspective than another review written by another author. She said the book held her interest, but was too hard to understand in places. Remember, she wasn't a professional reviewer. She was a reader. Those are the people who read our books.

I'll keep Tweeting and making new friends on Linkedin, Goodreads and Facebook, but for the most part, I want to remember that I'm a writer who wants to connect with readers. I hope to find my niche in the writing world that blends nicely with the reading world. After all, no matter what, we are writers. I've included K. Weiland's A Wordplayer's Manifesto for your enjoyment. 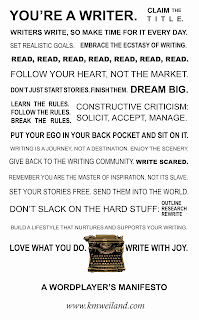 Beyond the Edge: A New Title By M. Pax 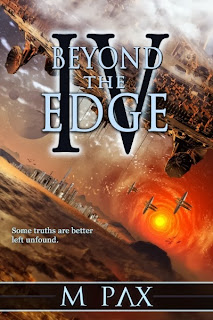 Presenting M. Pax's new book Beyond the Edge! Here is the fourth book in her Backworlds series that continues the saga. It is live on all Amazon sites, Smashwords and Kobo. You can find all the links on her landing page HERE.

M. Pax has delighted us with a whole new world of characters that rub up against each other so each one shines like a bright star. But not all the characters are the good guys, and even those have their downsides. I have enjoyed the Backworlds series so far and each book brings more challenges to the protagonist and his friends. I fully intend to curl up with this book and have a futuristic holiday Beyond the Edge.