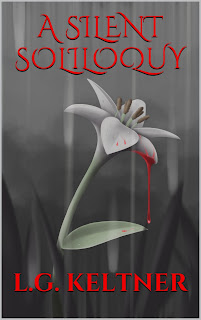 I'm happy to welcome L.G. Keltner on day 4 of her blog tour. I asked Ms. Keltner to talk about the writing process that evolved into her new book A Silent Soliloquy.


First of all, I’d like to thank Karen Elizabeth Brown for letting me stop by her blog today!

I’d like to talk a little about the writing process behind A Silent Soliloquy.  This story developed in a rather disjointed and bizarre way.  Anyone who knows me won’t be shocked by this fact.  It started life as a couple of short stories that didn’t seem to have all that much to do with each other at first.  Kali’s storyline began as a piece of flash fiction that went on to be rejected by a couple of online magazines.  In retrospect, I’m glad it was rejected now.  My novella probably wouldn’t exist in its current form if that rejection hadn’t happened.

Around that same time, I was working on a slightly longer short story that involved Lassandra Rourke and The Dream Factory.  I became caught up in her story and the kind of world she lived in.  It was clearly a dystopian society, but I wanted to know more about it.  Even though it was originally meant to be a standalone short, I felt like there was more to be discovered.  Still, I didn’t know what that nebulous “more” was, so I set aside for a while.

During this time, I had the disconcerting feeling that I’d never be able to finish anything.  I suspect we’ve all felt that way before.

A few months later, I touched on Mitchell’s story for a blogfest.  The portrayal of an awkward kiss and Mitchell’s need for secrecy inspired me to ask a fateful question: How would it feel to be fundamentally unable to communicate with the world around you?  That question seemed to link up with the portrayal of mental illness and exploitation in The Dream Factory.  It also made me think of the genetic experimentation in Kali’s story, and I began to envision a silent girl.  This girl had been weaponized, but the process that made this possible left an intact personality trapped inside, unable to speak or control the body she lived in.

The connections between the stories grew stronger as I pondered them, and over time, I was able to weave them together to create A Silent Soliloquy.  The project was both exhilarating and daunting, and it took me quite some time to get it to the point where I felt pleased with the result.  Though I frequently felt frustrated, I couldn’t give up.  This story demanded to be told, and I can only hope I’ve done it justice.

TIPPIE was created to be a weapon.  By all appearances, she's an ordinary girl of 18, and she uses that to her advantage in her work for The Facility.  What no one sees is that there's another girl buried deep inside.  She can't speak or control the movements of the body she inhabits.  As TIPPIE's silent passenger, she can only observe.  She uses the details she learns from TIPPIE's work to reconstruct the stories of other people's lives.  It helps her feel a little more connected to the world she can only watch.

When TIPPIE's work leads her to David, a young man with a haunted past and information that The Facility wants, TIPPIE uses her skills to earn his trust.  The silent girl beneath the surface knows that TIPPIE is only going to hurt him, but she can't help but feel for him.  Those feelings only grow, but she knows all too well that TIPPIE's work will soon come to an end.

L.G. Keltner spends most of her time trying to write while also cleaning up after her crazy but wonderful kids and hanging out with her husband.  Her favorite genre of all time is science fiction, and she’s been trying to write novels since the age of six.  Needless to say, those earliest attempts weren’t all that good.

Her non-writing hobbies include astronomy and playing Trivial Pursuit.

You can also add it on Goodreads.

Penned by Karen Elizabeth Brown at 12:08 AM