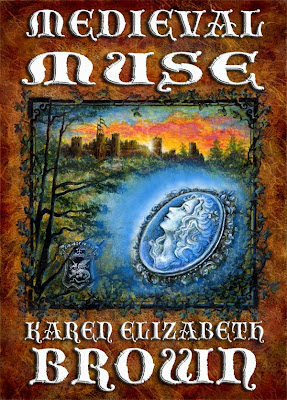 (Bookcover By Art By Retta)


What happens when Victoria Budroix receives a cameo that promises to give her the desires of her heart? Since she doesn’t even know what that would be, perhaps a trip to medieval times, intrigue, threat of war and an overbearing lord are on the list for some of her choices. Or could it be meeting her one true love?


Sir William of Conrad has escorted a stranger home to be under his protection. He discovers this woman speaks her own mind and melts his heart. He faces his father’s outrage and a broken alliance with the neighboring clan by falling in love. This could mean war.


Medieval Muse will be available starting August 1st as a free e-book from Smashwords. I will be having a launch party during August 1st - 6th.
Penned by Karen Elizabeth Brown at 8:06 PM